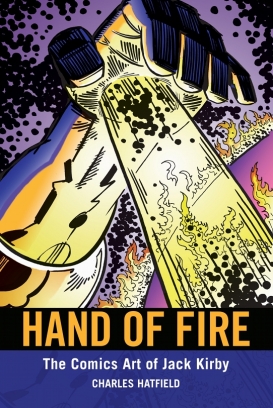 The cover image for Hand of Fire is a Kirby homage by artist Geoff Grogan, cartoonist, painter, collagist, Associate Professor of Art and Art History at Adelphi University, and host and producer of the podcast Blockhead (a wonderful tribute to Schulz’s Peanuts and cartooning in general). Geoff is the creator of the strips Spiking the Lens, Jetpack Jr., and Plastic Babyheads from Outer Space and the comic books Look Out!! Monsters, Fandancer, and Nice Work (also co-editor of the late, lamented comics broadsheet Pood). A Kirby devotee and expert, Geoff created the splendid collage below, which became the basis of a mural featured in the Comic Book Apocalypse exhibition of 2015. Thank you, Geoff! 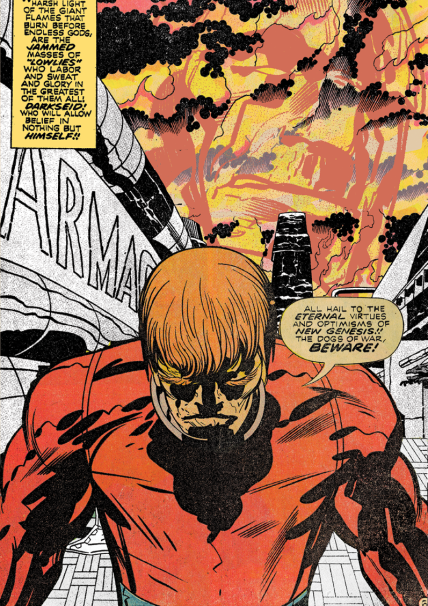 Father and Son by Geoff Grogan, after Jack Kirby (2015)

The Hand of Fire logo at the top of this page was created by adapting letter forms from The Demon No. 14 (DC Comics, Nov. 1973), edited, written, and drawn by Jack Kirby and inked and lettered by the wonderful Mike Royer. You can look this issue up on the Grand Comics Database here.

Hand of Fire is published by the University Press of Mississippi, a pioneering publisher of academic books in comics studies. They also published my (Charles Hatfield’s) first book, Alternative Comics (2005) as well as The Superhero Reader (2013), a historical anthology that I co-edited with scholars Jeet Heer and Kent Worcester.

This site was designed and is maintained by me, myself (CH). It launched tentatively in late 2010, then relaunched publicly in October 2011, pending the release of Hand of Fire. I update and tweak it as often as I can—it has become my blog for all things related to Kirby and Kirby studies.