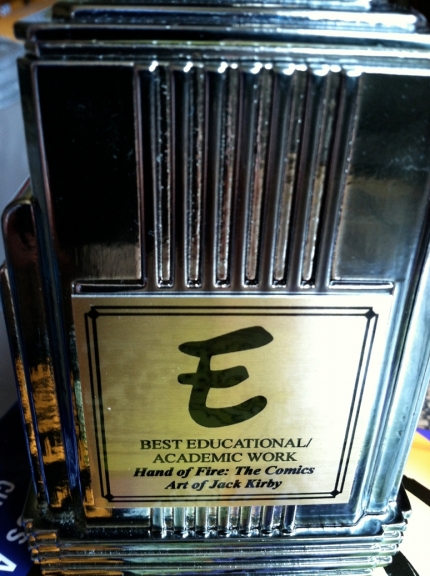 Good grief—I can’t believe it’s been thirteen days since my last post. I’ve wanted to say so much since then.

It’s been twelve days since the end of Comic-Con International in San Diego, ten since my family and I took off for our annual, always wonderful New England visit, and not quite one since our footsore, jet-lagged, suitcase-lugging return. We’re back in southern California, cooling our heels a bit perhaps, but also prepping furiously for new ventures in the days ahead—no rest for the overambitious!

During that time, Hand of Fire‘s Eisner Award, the time I spent signing and chatting at the Jack Kirby Museum booth (thanks to Rand Hoppe), the many warm, encouraging conversations I had, and the whole rapturous, adrenaline-fed, exhausting CCI experience has never left my mind. I’ve been to CCI many times, but never enjoyed it more. 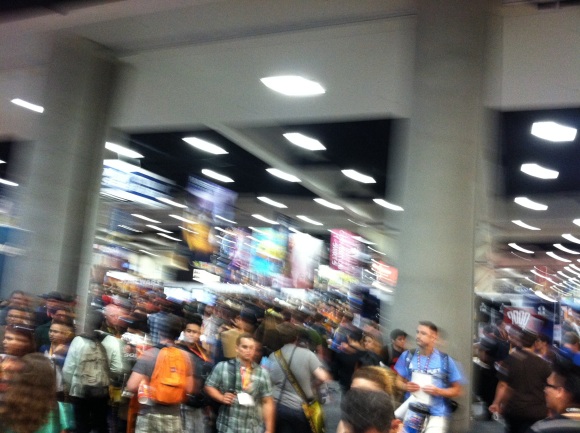 It was a great pleasure to make the Kirby Museum booth my nerve center, my family’s rendezvous point, and my default social stop on the bustling convention floor. It was likewise a pleasure to participate in several panels; witness friends, colleagues, and mentors at several more; discuss comics passionately throughout the several days of the show; and share podiums with Ben Saunders, Rand, Arlen Schumer, Craig Fischer, and John Morrow, as well as Mark Evanier and the others who took part in CCI’s annual Kirby Tribute Panel: Stan Goldberg, Paul Dini, and Paul S. Levine. 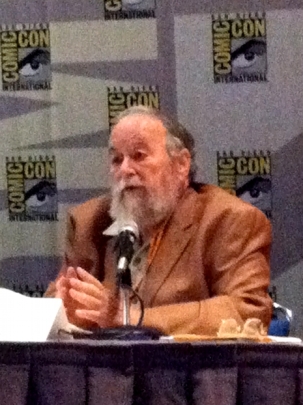 So many good friends and fellow scholars spent time with me during CCI. I can hardly list them all. But I would be remiss if I did not cite the “Pioneers of Comics Scholarship” panel (Saturday, 14th July) as a particular highlight: it was an honor to meet up again with several path-breaking scholars who have inspired me, including John Lent, David Kunzle, and my good friend and mentor Rusty Witek. 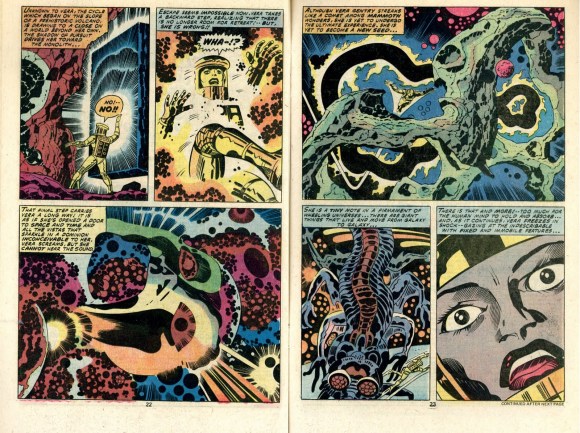 Likewise a thrill was Andrei Molotiu and Mark Badger’s panel on “Jack Kirby, Modernism, and Abstraction,” which I believe is going to have quite an impact down the road. Hearing Andrei and Mark talk about images like the above was a gift. 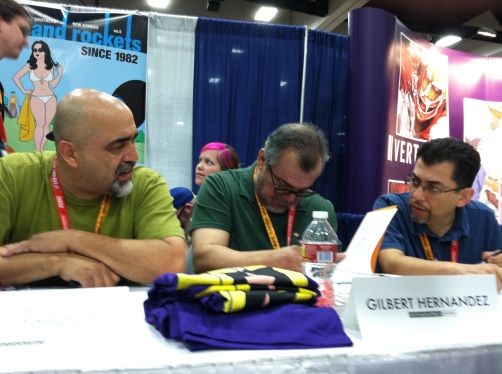 Another genuine treat was observing the 30th anniversary of Love & Rockets—and seeing Los Bros Hernandez, Gilbert, Jaime, and Mario, absorb some much-deserved accolades. At the L&R panel, several readers, among them Mike Allred, spoke movingly to the Brothers about the impact they’ve had. Seconded! I love L&R, and credit it for keeping me in comics as a grownup. Great, great work.

Also, I felt particularly fortunate to spend a bit of time with old friends and colleagues Marc Singer and (far too briefly) José Alaniz, whose works and conversation mean a great deal to me. And to converse with Tom Spurgeon, Diana Schutz, and others I’ve come to known from the comics business. Whirlwind social occasions, all too quickly passed! 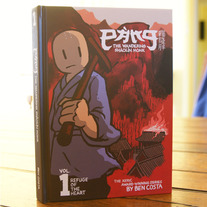 Most touching for me was the presence and support of so many present and former students of mine from CSU Northridge, from Ben Costa, author of Shi Long Pang, who was busy working a booth, to so many others (Norma, thanks for sneaking into the Eisner Awards hall early to give me a boost!). The number of students I talked to at CCI really surprised me! That meant as much to me as anything—it’s an honor to have taught these folks. 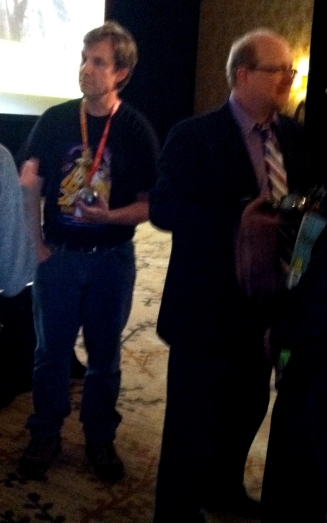 And most especially touching was having my family and several dear friends with me at the Eisner Awards ceremony, which, well, turned out pretty good. 🙂

Comic-Con gets a bad rap because it has grown so outsized, jam-packed, and crazy—and because, increasingly, comics seem to be marginalized even there, elbowed to the margins by the inrush of film, TV, gaming, and other media industry franchises. Comics, it’s often said, are second fiddle at Comic-Con, and of course that seems profoundly wrong. It’s true, I saw ample evidence of these frustrations at CCI this time, and, 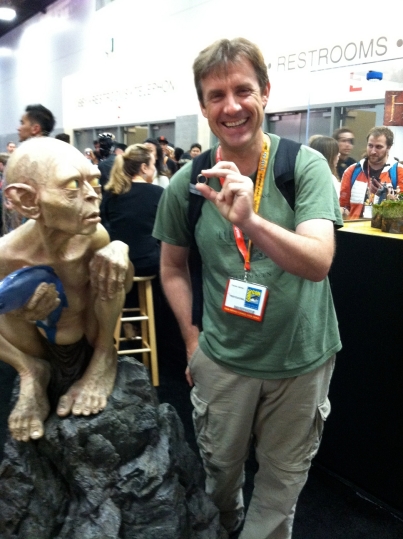 had I not been continually busy socially and professionally, I might have felt those problems keenly. The Con is a madhouse—one reason I did not attend in 2009-2011 despite the fact that San Diego is, so to speak, just down the road.

Yet I confess that, from the moment I arrived on Wednesday, I felt a tremendous surge of excitement: my adrenaline was indeed spiking. I knew that I’d be talking Kirby at the Con, that I’d know a fair number of people there, that I’d be working alongside and with some trusted colleagues, that my family would be with me much of the time, and that I’d probably have a lot of nice fortuitous meet-ups with good people here and there (I did). So I was supercharged and ready to go. I stayed that way right through to late Sunday afternoon—the Con was a gas, and felt like Hand of Fire‘s coming-out party.

Thanks to everyone who helped to make it so! Thanks especially to Rand and company at the Kirby Museum for giving me a berth.