A sad day. Numerous sources have confirmed the passing, this morning, of legendary Marvel Comics writer, editor, and publisher Stan Lee (b. Stanley Martin Lieber, 1922-2018). My condolences to his loved ones and friends, and to his colleagues and fans, who were legion.

It appears that TMZ.com and The Hollywood Reporter were among the first to break the news publicly; other sources, for example the Associated Press, New York Times, Los Angeles Times, and CNN, have followed suit.

Stan Lee served in the U.S. Army Signal Corps from 1942 to 1945. Website DoDLive (www.dodlive.mil) identifies this image as simply a “U.S. Army photo.”

Lee was 95 years old. Anyone who has been following coverage of his life over roughly the past year, since the death of his beloved wife Joan Lee in July 2017, probably knows how tumultuous his final days were, marked by rumors of frailty, vulnerability, and domestic chaos. Recent images of Lee on the convention circuit have sometimes been disconcerting, as the almost mythically peppy, seemingly indefatigable Lee finally began showing signs of age and dependency. Until very recently, Lee played the part of a Pop icon with gusto, getting out in the world, engaging his fans, and burnishing his legend.

Speaking personally, I had somewhat expected Lee’s passing, as the last few months have been filled with nerve-wracking, if sometimes contradictory, reports about his status. Yet I was surprised at how shocked, and saddened, I was to hear of his death today. The news brought tears to my eyes, and I am hard pressed to say why.

I have been critical of Lee, both in my book Hand of Fire and especially since his testimony in the Marvel v. Kirby legal case. I have also been critical of his hagiographers, those who tend to describe Lee as a real-life “superhero.” When I see the usual inaccurate coverage of Lee’s career, creative work, and relationships with other creators who worked under his editorship – and I have seen that sort of glancing, thinly researched coverage this very day – I confess I seethe with frustration. What Jordan Raphael and Tom Spurgeon say at the start of their 2003 book Stan Lee and the Rise and Fall of the American Comic Book (which I consider the best single book about Lee) still applies:

Stan Lee is one of the most important figures in American popular culture. He is also one of the least understood. […]

Here is the truth about Stan Lee: he didn’t create Spider-Man or any of Marvel’s most famous characters. He cocreated them. The distinction matters, because in that distinction lies the essence of his considerable accomplishments. (ix)

This seemingly simple yet crucial caveat is still routinely swept aside when reporters reach for superlatives to put Lee’s work into context. Just what is meant by “cocreated” is something I tried to wrestle with, too tentatively perhaps, in Hand of Fire – and that is indeed a question that continues to bear upon Lee’s reputation, one that has implications for the breadth and nature of his accomplishments.

Hand of Fire seeks to split the difference between praising Lee as Marvel’s editorial architect and criticizing him for his untrustworthy, often self-aggrandizing accounts of how Marvel actually worked in its 1960s heyday. Here’s a key passage:

Of course “Stan Lee” has long served various author-functions for fans, not least the conferral of a single tone or attitude on what is, really, a shapeless amassing of decades’ worth of inconsistent, heterogeneous work. But though Lee was Marvel’s impresario and publicist par excellence in the sixties and early seventies, and though at first he contributed to the comics’ content as a scripter, polishing if not steering the work of various narrative artists, he did not solely create any enduring Marvel properties. Nor did he, in fact, serve as scenarist for many of the most celebrated Marvel comics of the mid to late sixties. By the same token, Kirby – though he provided the conceptual material, the character designs, the unmistakable graphic style, the pacing, and, eventually, the plotting and overall direction of the Marvel books with which he was linked – did not solely author any of the seminal Marvels of the period. His work was constrained and subliminally altered at the editorial level, with text that reshaped and at times redirected his plots. Furthermore, Lee’s vitalizing influence saturated Marvel and determined its editorial ethos. Kirby worked harder, but, commercially, Lee made things happen. (94-95)

This passage, which has been quoted and talked about, is one that I’m proud of, for its preciseness, its refusal to take things too simply, and its distance from the angry, intemperate things I would have said had I written Hand of Fire at a younger age. Yet during the Marvel v. Kirby case, and even since, I have not been able to convince myself that an “angry, intemperate” response was wholly uncalled-for. I tried to write the book more or less dispassionately, but since then I’ve often been passionately angry about Lee’s continued prevarications when it comes to the question of who did what at Marvel back in the sixties. It has been easy to blame Lee, or rather, hard not to blame him. He has been, after all, a Grand Old Man of American comic books (as Raphael and Spurgeon put it), a totemic figure, and one with the power to shape the way people view history. I wish he had been more forthcoming.

Some readers have told me that Hand of Fire goes too easy on Lee, or on the official Marvel history, that Lee did not contribute substantially to the comics’ content – or if he did so, then only negatively – and that he emphatically did not “steer” the work of Jack Kirby. I remain unsure of quite how to tell the story, but am convinced that Lee added considerable pizzazz, spirit, and warmth to those comics; his voice mattered. Of course I’m equally convinced of what the above says about Kirby: that Kirby provided the concepts, designs, storytelling, pacing, style, and eventually, though perhaps to some degree even at the outset, the plots of the Marvel comics he drew. The same is emphatically true of the work that the late Steve Ditko did under Lee’s editorship. The record is murky, but we do know that Lee expected Marvel’s artists to plot and to make fine decisions about pacing and storytelling, and we do know that stalwart artists Kirby and Ditko had proven their ability to create comics stories from scratch again and again prior to the Marvel explosion. Obviously, they didn’t need Lee in order to make comics – though they did need Lee to create Marvel Comics. What Lee himself had to say about the working arrangement at Marvel shifted over the years, from (sometimes) frank acknowledgment of the artists’ contributions to (sometimes) insistence that he himself had provided what was most important about the characters. In any case, the “Marvel method” of production has permanently clouded the question of who did what, who inspired what, and to what extent Lee and his artists truly worked together. 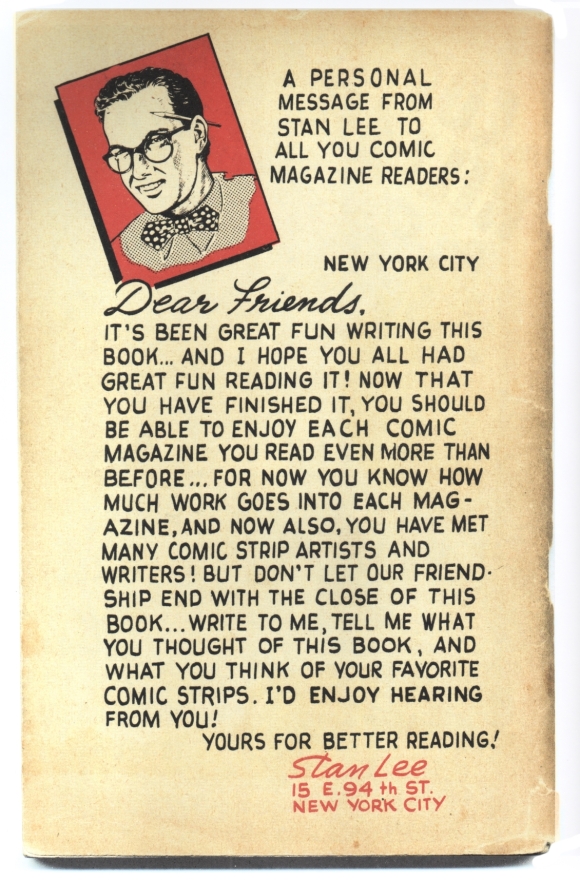 I’ve worried over these things, and felt these conflicted feelings, for quite a while, and will surely continue to feel them. Anyone paying close attention to Kirby’s career story must think about the gap between the official history (even the history adopted by Marvel in the wake of the Marvel v. Kirby settlement) and what must really have happened among the disparate talents and personalities that made possible the massively multi-authored vast narrative that is Marvel. Anyone who has delved deeply into Kirby’s story must also be have a version of Stan Lee’s story on their mind, even if that version is, like mine, conflicted.

When I was a kid, though, ah, Stan Lee’s name was one to conjure with, and his voice became as familiar as my own. I read more comics than I can count that started with this claim:

Lee’s name became part of a reading ritual; he was the figurehead of figureheads, a magic character. And to this day I have a feeling for the idea of “Stan Lee” that no amount of research has been able to quell. I was reminded of that this morning, and the feeling, oddly, hurt. Having spent the last few days pawing through some too-long-neglected boxes of comic books and reliving some of my long-ago days as a fan and collector, I may have been too-perfectly primed to be shocked by the news of his passing. News of his death sent me into a fog.

Words like charlatan and huckster cling to Lee, and comparisons to carnival barkers, or even P.T. Barnum, are never far away when Lee is the topic of talk. I understand why; frankly, those words are deserved. Lee knew this well, but he wasn’t simply a shill. A shill would have had his hour, but then faded, and fast. Lee, though, was something else. He combined the larger-than-life qualities of a Marvel hero with the affability of a beloved neighborhood character and the approachability of an old friend. Sometimes when I think of Lee, I think of his seeming mendacity and conveniently porous memory. I’ve had that version of Lee in my head for nearly thirty years and counting. But sometimes when I think of Lee, I think of being a kid with a comic book in front of him, with a whole great big world spreading out before him, and I feel, still, a certain awe and gratitude at the whole crazy business.

RIP Stan Lee. I cannot imagine my life as a reader and thinker, nor my coming of age as a comics scholar and critic, without him. As editor-impresario, Lee brought the work of Kirby and a gaggle of other disparate artists to market under one colorful banner, and in so doing enriched my life and the whole American comic book field. I don’t know if I can call Lee one of my cultural heroes – I suppose Hand of Fire tells the story of my loss of faith – but at one time he surely was, and I cannot but thank him for that. Working in tandem with other singular talents, Lee helped transform the comic book, and though his greatest period as a writer-editor spanned just a decade – only a fraction of his long career – what he helped bring to the newsstands in those days, the heady days of Kirby and of Ditko, and of the dawning Marvel Universe, was stupendous.

PS. Among the several obituaries I’ve read today, I would recommend  Jonathan Kandell and Andy Webster’s careful one for the New York Times, and Michael Dean’s excellent one at The Comics Journal. (I don’t agree with Dean’s assessment of Lee’s skill as a writer, versus Kirby’s, but it’s a lovely, insightful piece, with a ringing conclusion.) 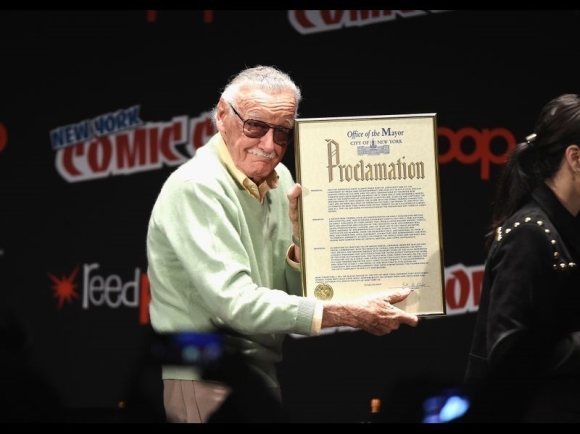 PPS. I just rediscovered this odd, ambivalent poem I wrote about Stan Lee years ago. I think it captures both my gratitude and my ambivalence. ‘Nuff said.