Leave a comment
By charleshatfield Jack Kirby's Life, Kirby at War, Kirby in Media, Other Writers on Kirby

Get, Read: The Oven, by James Romberger

Jack Kirby is in danger of becoming a mythological character. On the one hand, he is now a “Disney Legend,” his name and career story coopted to bolster the continuing mythification of Marvel. Hype for recent and forthcoming film blockbusters has brought Kirby to, almost literally, Disney’s Main Street:

On the other, scholars and creators have recently made Kirby into a literary character, on the stage and on the page: protagonist of both fantastical homages and more grounded historical fictions. Examples of the former can be found in, say, DC’s 2017 spate of one-shot “Specials” celebrating Kirby’s centenary (notably, the Sandman special dated Oct. 2017) or Tom King and company’s tragic homage in the pages of the otherwise-boring Kamandi Challenge (Nov. 2017). These are fantasies: dreams of Kirby freed from the rigors of historiography. For the latter, the more grounded historical fictions, take for example the biographical play King Kirby by Crystal Skillman and Fred Van Lente (2014), premiered Off-Off Broadway at The Brick in 2014, or another biographical play, The King and Me, by Dutch writer Ger Apeldoorn (2015), performed in the UK, the Netherlands, the US, and most recently in conjunction with the exhibition Jack Kirby: la galaxie des super-héros in Cherbourg France.

But consider too the comics informed by the details of Kirby’s life: Tom Scioli and Jean Depelley’s collaboration on “Private Kirby Adventures,” based on Kirby’s experience as a combat infantryman, or Scioli’s graphic biography in progress. Such projects undertake serious research into Kirby’s life, and constitute sequels, of a sort, to Kirby’s own classic autobiographical comic, “Street Code.” James Romberger’s just-released “The Oven” could be added to this list. It’s a subtle piece whose version of Kirby, while admittedly fictive, is sensitively and convincingly drawn. It’s also a beautiful comic. 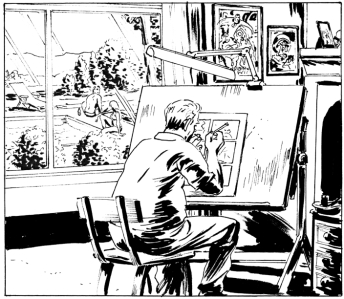 In “The Oven,” an elderly Kirby goes from his drawing board to the hospital, and a CAT scan, even as his mind turns back to the war-ravaged fields of France, circa 1944, and his own near-fatal encounter, as a foot soldier, with a troop of Nazis—a haunting moment in a brick and tile factory in the town of Corny, on the banks of the Moselle River. Romberger’s panels shift from black to gray as the older Kirby, near seventy, shifts from the present of the hospital back to his indelible memories of war, when he was in his late twenties. Young Kirby and a fellow soldier get holed up in factory kilns—ovens for baking ceramics—each one a squat octagon, a little cell. The kilns’ warmth draws the soldiers in; they are cozy:

Kirby, elder and younger: entrapment in “The Oven”

But then Germans troops enter the factory, and the two GIs have to hide inside the kilns, quiet, desperate. This scene runs parallel to the older Kirby’s immersion in the cell of a CT scanner, as he undergoes a test for cancer. Both, as Kirby’s dialogue suggests, are “tight spots,” pivotal and implicitly life-threatening moments. Romberger, however, takes a discreet, understated approach—there are no histrionics here—and ends on a near-silent page in which Kirby returns to his drawing board, while awaiting a doctor’s call (with test results). I found this last page quietly moving.

Back to the drawing board…

“The Oven,” a 20-page short, appears in the first issue of Romberger’s projected anthology series For Real, which aims to focus on fact-based comics stories and essays (a typically quixotic and unconventional project for its publisher, the terrific Uncivilized Books). Alongside “The Oven” runs a roughly 10-page essay by Romberger, “The Real Thing,” which makes the case that Kirby’s wartime experience was life-changing and central to his art. Romberger breaks new ground in this now-familiar territory, stressing the “intimate acknowledgement of trauma and suffering” that suffuses Kirby’s work, and contrasting Kirby to other comics creators—notably the great Alex Toth, whose war comics, Romberger notes, have a sanitized glamour and little of Kirby’s lived-in, haunted quality. There are anecdotes and insights here that Kirby scholars will want to plumb. 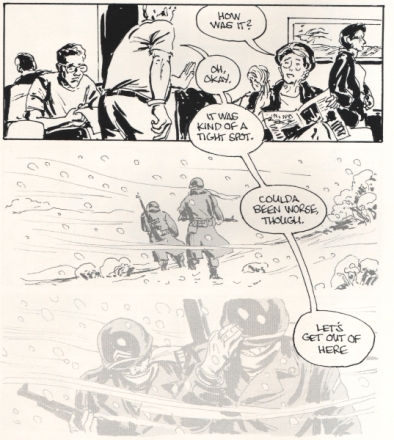 I love the matter-of-factness here.

“The Oven” is a speculative biographical fantasy. Romberger is frank about fictionalizing Kirby’s experiences; he calls his story a mix of “approximation” and “guesstimation,” and begs indulgence for “the liberties I have taken.” Yet “The Oven” is also a respectful and soulful effort, persuasive in the unassuming way it depicts Kirby and his wife Roz. Geographical and biographical details are suggested rather that ostentatiously insisted upon; in effect, Romberger hides the depth of his research, or rather, does not ask to be hailed for it. “The Oven” goes by disarmingly quickly, belying the depth of knowledge and care surely required to make it.

Graphically, rather than aiming for spectacle in the familiar late-Kirby mode, Romberger’s drawing harks back to the plainspokenness of much of Toth’s work. Romberger’s naturalism, brushwork, and lettering all recall Toth, and the spartan four-tier grid that he favors here reminds me of the restrained three-tier, six-panel pages that were common in Toth’s Dell comics around the late 1950s. Shorn of the vivid colors that partner Marguerite Van Cook often brings to Romberger’s work (see their superb collaborations on Seven Miles a Second and The Late Child), “The Oven” is spare, unadorned work, with loose and rugged figures, muted body English, and minimal yet effective evocations of “tight” spaces. The freedom of the rendering remind me of other artists who have learned from Toth (Tony Salmons, say). But the tamped-down storytelling and hushed suspense are distinctly Romberger’s. The pages look as if they were drawn directly from the mind.