Longtime comic-book artist and revered Jack Kirby inker Joe Sinnott (1926-2020) passed away peacefully on June 25. His family reported that the 93-year-old Joe “enjoyed life and was drawing up until the end.” Mr. Sinnott is such a beloved artist and essential part of the legend of Kirby (and of Marvel Comics) that I wanted to note his importance and passing here on kirbystudies.org. Sincerest condolences to all of his loved ones, colleagues, and fans.

What follows are brief remembrances; in a coming post, my friend and colleague Craig Fischer will share a detailed essay about Mr. Sinnott’s work.

My friend and colleague Tony Puryear (co-creator of Concrete Park) posted the following to Facebook on the morning of June 25, and I reproduce it here with Tony’s kind permission:

Joe Sinnott was the comic book inker par excellence and a pro’s pro. Because of the poor reproduction of early comics publishing, printing comics art from pencil drawings was impossible. It was, and is, the inker’s job to turn those sometimes rough, sometimes rushed, sometimes ambiguous, sometimes awful pencils into crisp, clean black and white. The inker also must bring something to the party, their own style. Joe Sinnott did this as well as anyone who ever picked up a brush.

His work with Jack Kirby on their legendary run on Fantastic Four (and “with” is almost a misnomer in this case; the two men never met till after their run was done), remains a comics gold standard. Kirby’s work, his ultra-dynamic figures, his insane, bio-psychedelic machinery, his explosive …explosions, bloomed to mind-blowing life as embellished by Sinnott’s unbelievably sure, clean line. Hair looked like hair, metal looked like metal, stone looked like stone, The Human Torch looked like The Human Torch, and The Thing, with every issue, looked more and more like the platonic ideal of The Thing. This stuff is way, way harder than it sounds, but it is of the essence of the comic book experience.

Sinnott went on to ink John Buscema, a genius in his own right but a different kind of animal from Kirby, when he took over Fantastic Four. To me, that’s when you saw just how good Sinnott was. He didn’t miss a beat. Fantastic Four still looked like a million bucks, the crazy machines, the outer space vistas and The Ever-lovin’ Thing still looked just as they should, and you realized that if the great age of Marvel Comics had a house style, it lived in Joe Sinnott’s right hand.

RIP Joe Sinnott, one of the greats.

On June 30, my friend and colleague Geoff Grogan, cartoonist and teacher, who created the cover for Hand of Fire and a mural for our 2015 Kirby exhibition, sent me this note, which, again, I reproduce with his kind permission:

So much to say, but I’m struggling to find the words. 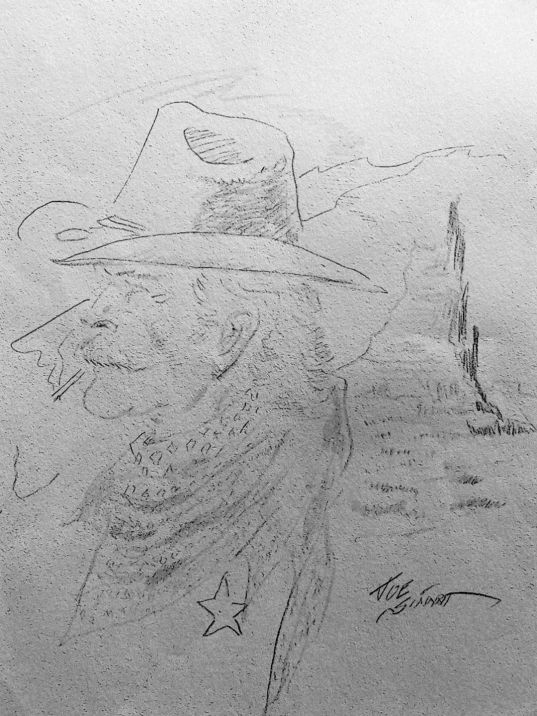 Joe Sinnott’s last sketch, according to his family (from his Facebook page).

Finally, I posted the following to Facebook on the morning of June 25:

RIP Joe Sinnott, whose exquisite inked lines limn the images in my dreams. Deepest condolences to his loved ones, colleagues, and fans everywhere.

Mr. Sinnott had a long and varied career in comic books as both penciller and inker. He is best known for setting the look of Marvel’s Fantastic Four through his long tenure as the inker on that title—and in fact his dynamic yet graceful inking, fluid, sensitive and adaptable, defined the Marvel house style for years. His inflected brush lines were impeccable, solidifying form, creating texture, imparting wholeness to pages touched by many hands. When paired with the intense, hyper-dramatic compositions of Jack Kirby on Fantastic Four, Sinnott’s work could be enticingly slick and yet mind-boggling. That was truly a felicitous combination of artists.

When Sinnott returned to Fantastic Four in 1965 and became its regular inker (starting with issue #44), everything about that title clicked, and, for my money, the very best run of Marvel comics began. Sinnott brought an extra touch of grace and fluidity to Kirby’s wild geometry and explosive action, and Kirby pushed himself to the limit too, gifting Sinnott with some of his best work to embellish. Rugged yet lovely, the book defined the best in superhero world-building for a long, long time.

Do yourself a favor and go search the Grand Comics Database (comics.org) for Mr. Sinnott’s work as both penciller and inker. He was an accomplished and delightful artist. 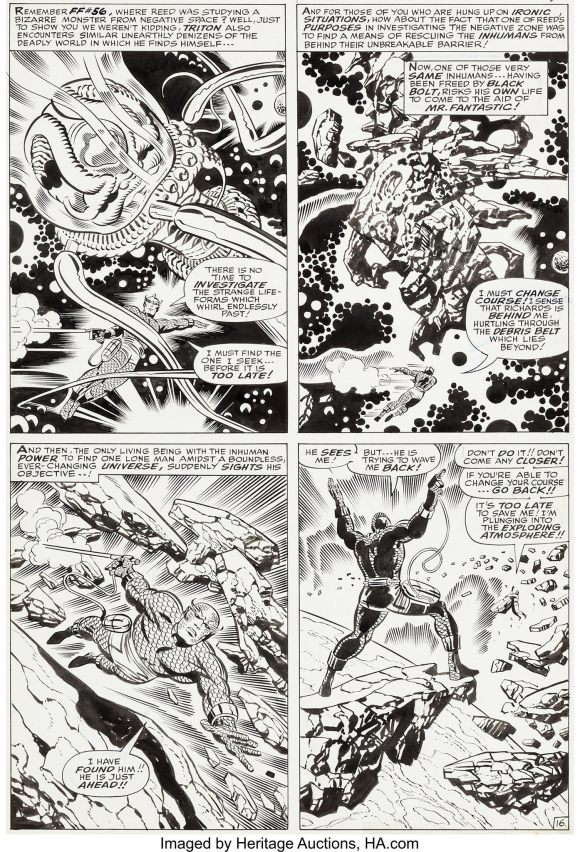 Original art for a page from Fantastic Four #62 (May 1967), inked by Joe Sinnott. © Marvel. Image from Heritage Auctions.

For more online information about Joe Sinnott’s career, I recommend the overview by Steve Ringgenberg at The Comics Journal, http://www.tcj.com/joe-sinnott-1926-2020/, and the interview with Sinnott by Bill G. Wilson, Duffy Vohland, and Gary Groth at the New York Comic Art Convention in 1970 (fifty years ago!), posted to The Comics Journal by Groth, http://www.tcj.com/1970-joe-sinnott-interview/[.] The Seamon-Wilsey Funeral Home of Mr. Sinnott’s home town, Saugerties, New York, has his obituary.

Joe Sinnott lived a storied life, with grace and class, and man did he make comics look good. RIP, sir.

Joe Sinnott, at home at his drawing board, Saugerties, NY. (Date and photographer unknown.)