1 Comment
By cjfischer63 Critical Conversations, Jack Kirby's Life, Kirby in Media, Other Thinkers on Kirby, Other Writers on Kirby

(This is the second part of a critical conversation about Tom Scioli’s new graphic biography, Jack Kirby: The Epic Life of the King of Comics. For the first part, see here. We’ll follow up with further discussion in the next few days.)

Like Charles, I found a lot to like in Scioli’s Jack Kirby. The book includes some of my favorite Scioli visuals to date. There’s a softness to the line and colors, particularly in the early pages, which evokes both a nostalgic mood and the qualities of the media Jack drew with as a child, such as the crayons he held when he scribbled on walls and the charcoal stick he tried to master during “drawing lessons at the Educational Alliance.” 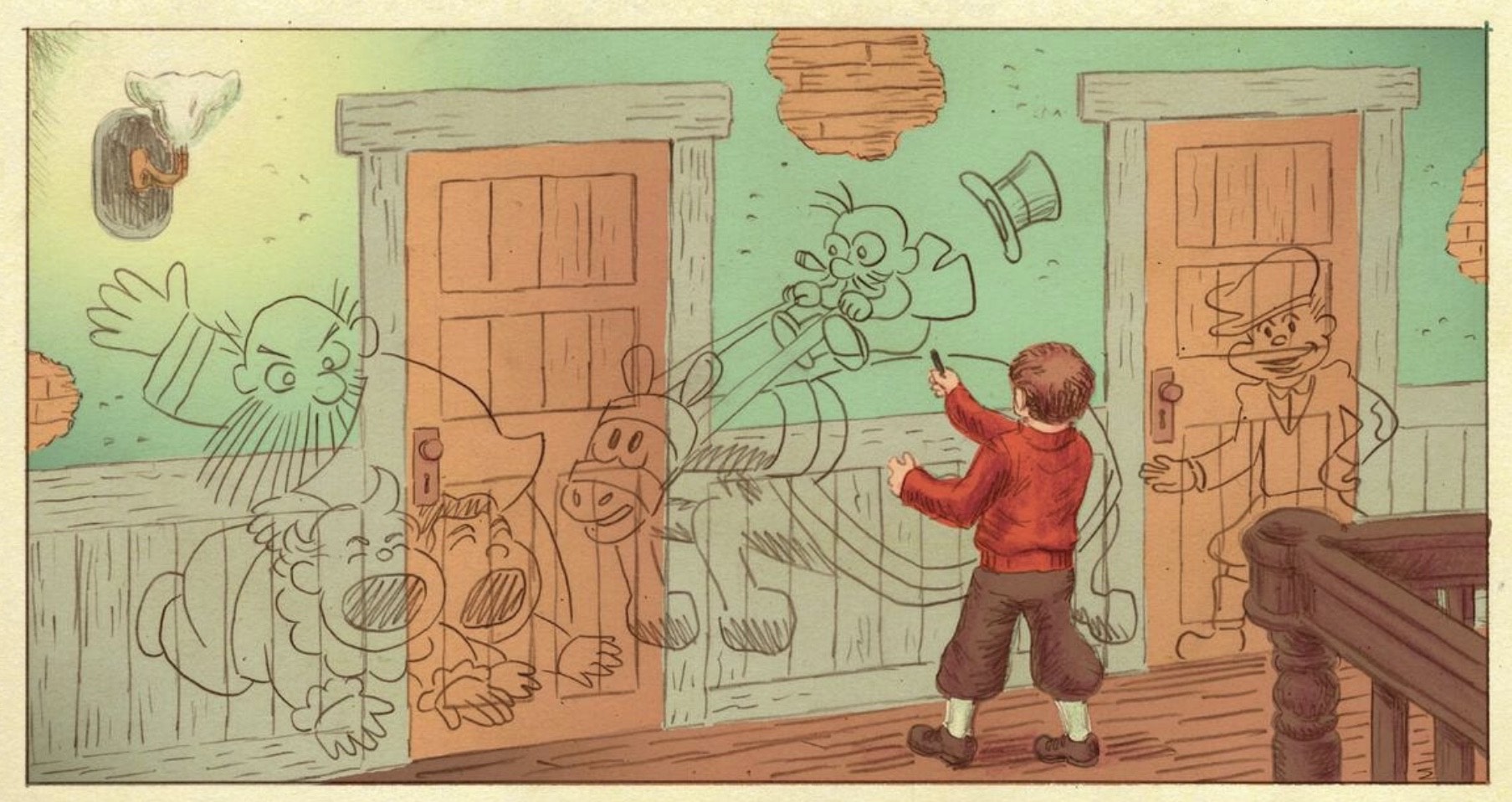 I also agree with Charles about Kirby’s manga-eyes functioning as a distancing device, as Scioli’s reminder that his biography’s version of “Kirby” is as much a subjective construct as a true portrait of the man. On a more basic level, those eyes define “Kirby” as more cartoony than everyone else around him, more embedded in his artistic imagination than the quotidian real world. Kirby’s eyes get bigger as Scioli’s book progresses, as if—despite his love for Roz and his children—Kirby willfully abstracts himself down to pure thought and creation, akin to his portrayal in Supreme: The Return #6 (1999), where writer Alan Moore and artist Rick Veitch depict their idealized Kirby as a disembodied god who generates characters and concepts as easily as breathing. If anyone deserved to live in a crackling, physics-defying cartoon world of their own making, it’s Jack.

However, I also share Charles’ ambivalence with Scioli’s decision to narrate Jack Kirby in fictionalized first-person. I think the book needs less first-person Kirby and more of an art-history approach, more of a serious discussion of what made (and makes) Kirby’s art so revolutionary. How did Jacob Kurtzberg become Jack Kirby, King of Comics (fanfare!) and how did he build, acquire, and discover the storytelling skills he’d use and modify throughout his career? Kirby himself was mum on these subjects. In the dozens of Kirby interviews I’ve read, Jack speaks about his love for individual cartoonists only in broad, superficial terms: he intuitively digested ideas and techniques from artists he admired (Milton Caniff, Alex Raymond, Will Eisner, Lou Fine, Wallace Wood) but lacked the vocabulary or inclination to do specific visual or narratological analysis. He wasn’t an academic or an artist like Gil Kane who opined in depth about American comic book history.

Scioli gets this right: the Kirby in his biography—rightly characterized by Charles as in sync with the real Kirby, a scrappy doer rather than a self-reflective theorist—skips from publisher to publisher and event to event with only passing mentions of his inspirations and his own growth as a visual storyteller. On page 19, Scioli mentions that Kirby briefly drew Socko the Seadog, a comic strip designed to be a “two-bit…clone” of the popular Thimble Theater newspaper strip featuring Popeye the Sailor, and that Kirby’s art copied the style of Popeye creator Elzie Segar:

Immediately I was curious if Segar’s visual flourishes and storytelling techniques became part of Kirby’s toolkit, but Scioli—through “Kirby”—instead charges forward to discuss Kirby’s production of “a variety of strips in a variety of styles, under a variety of pen names,” all of which receive the same single-panel, cursory coverage as Segar. How much did Kirby learn and grow during this period? Did unrelenting deadlines force Kirby to grow quickly from a journeyman to a standout cartoonist? Scioli doesn’t explore these questions.

Another example: Page 21 shows us Kirby holding down a low-level job in Will Eisner and Jerry Iger’s comics sweatshop, where his pencils were inked by Lou Fine for a comic strip version of Dumas’ The Count of Monte Cristo that appeared in Jumbo Comics in 1938. Here’s a panel from the published first Count strip and Scioli’s treatment of the same panel in the Kirby biography:

In Scioli’s caption, “Kirby” briefly acknowledges that Fine influenced his art, but the image in this panel doesn’t elaborate on the nature of that influence. We see Kirby’s pencil hovering over the paper, sketching the man in the top hat, rather than a picture or description that clarifies how Fine taught “shading and atmosphere” to Kirby. In writing the biography in first-person prose, and in being faithful to Kirby’s public tendency to utter vague, almost universally positive judgments about other artists, Scioli sacrifices his own opportunity to tell or show us more about Fine’s effect on Kirby’s cartooning. Scioli doesn’t place Kirby in the context of the other practicing cartoonists of the late 1930s, even though everyone was reading everyone else, and sharing brushes and stories at sweatshops and syndicate offices.

One defense of Scioli’s approach might be that his biography is for young readers who know little about Kirby and wouldn’t recognize Segar and Fine’s names at all. But even novice readers would better understand Kirby’s uniqueness if there were more historical context for his art, and more comparison with his contemporaries. (The interlocking simultaneity, the war-on-several-fronts storytelling, of the Fourth World is even more of an achievement when seen against the done-in-one inconsequentiality of most DC comic books of the early 1970s.) Further, I’d argue that a biographer—regardless of their readers’ median age and (un)familiarity with the person under scrutiny—should not only present their subject’s life as accurately as possible (Scioli does this) but also tell us why their subject matters. An argument that explains Kirby’s significance should include a deeper-than-the-surface consideration of the qualities of his art. The balance feels wrong when Scioli spends several pages on Jack Schiff’s shady treatment of Kirby, while ignoring the images and stories at the heart of Kirby’s importance.

Perhaps Scioli was influenced by the segment of Kirby fandom whose mission is to extol Kirby as the superior creator (writer and artist) over Stan Lee. I agree with these fans: Lee once described himself as “the hackiest hack that ever lived” during his pre-1960s, pre-Marvel writing career, and he only transcended hackdom by working with explosively creative artists like Kirby and Steve Ditko. That said, I’m tired of the endless discussions, especially on social media, about how Lee fucked Kirby over. He did. It’s true. But focusing on this point minimizes Kirby’s achievements during his non-Marvel years, while, ironically, keeping Stan the Man perpetually in the conversation. It’s time to make the case in positive terms for why Kirby is one of the most inventive artists of the twentieth century, and there are models to follow in this, such as Dan Nadel putting Kirby in dialogue with artists outside comic books (as in Nadel’s edited What Nerve! exhibition catalogue of 2014, where Kirby is discussed alongside the Hairy Who, Destroy All Monsters, and Forcefield) and the arguments in Charles’s Hand of Fire about Kirby’s drawing-as-writing and the technological sublime. Let’s not define Kirby primarily as a victim; let’s spend fewer words (and pages) on Schiff, Lee, and Martin Goodman than on the singular qualities of Kirby’s creativity and images.

I agree with Charles that the first half of Scioli’s book is more inventive than the rest: the six-panel grid gets monotonous in the second half, as does the back-and-forth between (a) the introduction of new characters created by Kirby (where Kirby often credits earlier authors and cartoonists with inspiring these characters) and (b) events from Kirby’s life, including his disappointments at Marvel and DC in the 1960s and 1970s. But my disappointment with Scioli’s Kirby’s biography? Not enough about the art.