Tomorrow, Friday, August 28, 2020, would have been the 103rd birthday of Jack Kirby. To honor the occasion, the Jack Museum and Research Center is holding 3 Days for 103, a three-day online event series to be streamed live to Facebook, YouTube, and Twitter. Running Friday the 29th through Sunday the 30th, from 11:00 a.m. into the evening each day,  3 Days for 103 boasts a terrifically diverse roster of guests from comics, art, film, and other fields, including colleagues, family, biographers, fans, and fellow artists. (I’m proud to be in that company: I’ll be interviewed on Saturday, Aug. 29, from 4:00 to 5:00 p.m. Eastern time.)

3 Days for 103, according to the Museum, will stream to Facebook and YouTube, and those who follow the museum on those platforms can elect to receive notifications for each event. In addition, the 3 Days for 103 events will stream to Twitter (via Periscope), but in that case, says the Museum, “there are no individual links to share”; simply follow @JackKirbyMuseum throughout the days.

The events will be promoted using the hashtag #Kirby103 — please spread the news! The Kirby Museum has the details, and full program, here: https://kirbymuseum.org/3for103/

Thanks, as ever, to the Kirby Museum for its tireless and inspired efforts! 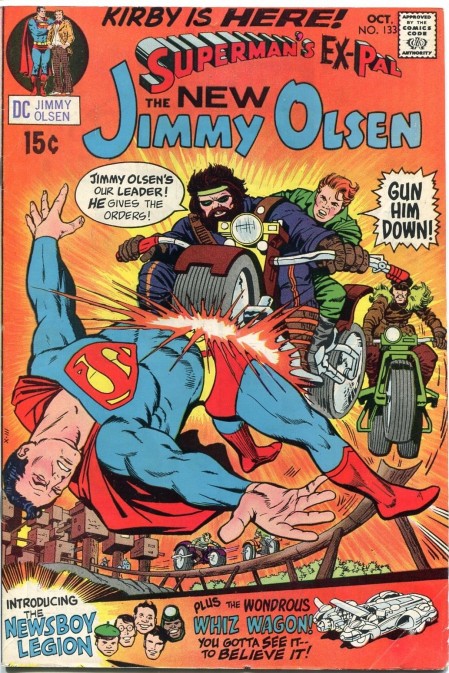 Fittingly, it was fifty years ago this past Tuesday, Aug. 25, that DC Comics published Kirby’s first teaser for The Fourth World: the epochal, idea-crammed, and fearlessly strange Superman’s Pal, Jimmy Olsen #133. Just to read that comic is to experience a sort of Kirby contact high: so amazing. It’s hard to believe it’s been half a century since The Fourth World premiered — a real milestone!

PS. Also, taking us back closer to Kirby’s roots, this week blogger Alex Jay shared more from his research into Kirby’s life — namely, images of Kirby’s World War II draft registration card. These images are revealing glimpses into Kirby’s (and New York City’s, and the USA’s) life in mid-October 1940. A lovely thing to see, especially during this special week.

PPS. Craig Fischer and I will continue our conversation about Tom Scioli’s graphic biography Jack Kirby just as soon as we can!